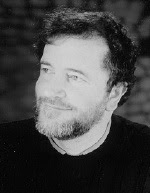 The funeral today of John O'Donohue resembled that of a Gaelic Chieftain. A leader. And it was as a spiritual leader that John was celebrated and loved. A man of God. A man of the people. A man of the Burren landscape. A man of the Book and all literature, art, and culture.

The church bell rang out to receive his mortal remains carried shoulder high into the church where he was baptised in January 1956. Church and State was represented. Local and international turned up.

His good and best friend, Fr. Martin Downey led and presided and delivered a powerful homily. One John would have approved of.

A niece and nephew sang soulful music and song. His life partner, Kristine read a poem written by John for her,It was full of love and hope for the future. But a future not guaranteed. Hopes of a one and only anam cara।His brother Pat delivered a eulogy that fully captured John's spirit.John, he said always spoke of people " minding" each other, "sheltering" each other in safe keeping. He told a lovely story that John liked: A man was going to the market with pigs one day. In all he had 4 pigs but only took one at a time. Going back and forth all day. Why, asked his neighbour, don't you take all four at once and "save" time? Ah, what's time for a pig, he replied!


His final journey to the grave took place amid a downpour of rain and wind. John would have loved all this holy water. 'Happy the corpse the rain falls on' says an old Irish saying.

He was laid to rest. The rain stopped. People slowly moved away from a grave. A grave that will be often visited.

His life was courageous,fun loving and inspiring। He has left a legacy of written and spoken works that will bring hope to many. For many a long day to come.

I would like to live
like a river flows,
carried by the surprise
of its own unfolding.

Emotrance Margarita said…
Hi Tom thank you for this. I knew John only from his writings and some of his interviews. I loved his voice and his wonderful way of speaking with that wonderful blas. Thank you for the account of the funeral. I lived it through your account. Strange we want to know all about a person we love. John's legacy is so beautiful and so deep. I know he is minding us. I asked him to help me today and I know he did. May he rest in peace tonight in the heart of the earth he loved.
January 12, 2008 at 7:55 PM

Unknown said…
Thanks Vic and golden

Appreciate the comments. Vic, I can identify with you. I lived in Malawi in the late 80's and early 90's..A true blessing.

golden, Henri Nouwen says that we must wait for the good things our loved ones that die will send us. Jesus sent..the Holy Spirit.
January 12, 2008 at 11:23 PM

Anonymous said…
Thank you for the evocative report of the funeral. I know the Burren and even Fanore ... and have wave-lapped, sea-worn stones from Doolin beach on my window-sill as I write. They have been as far as Tanzania and North Carolina with me. Perhaps you would like to hear John O'Donaghue's last interview with Krista Tippett in the Fall, last year.
http://speakingoffaith.publicradio.org/programs/john_odonahue/index.shtml
March 3, 2008 at 5:49 PM