I am the gate of the sheep 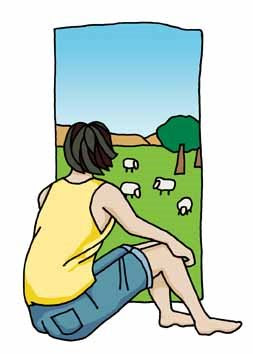 To bemoan change and to yearn for the past is to deny the wonder of God' gift of creative adaptability. Structures and institutions must adapt to new needs and opportunities or else become irrelevant quickly. The Church is no exception. The core teaching and values of following Christ remain constant but the most effective way in which they are to be lived out must be discovered and implemented by each generation, learning from the past but living in the present while planning flexibility for the future.

Such a one will be a person of hopeful joy rather than of cynical despair; a person of generous risk rather than of comfortable cuteness. Only God's grace could inspire such living. It is open to each of us to create an atmosphere where such a call can take root.

(Commentary by Tom Clancy. Taken from "Preaching the Word", Columba)

The true disciple is an expectant person, always taking it for granted that there is something about to break through from the master, something about to burst through the ordinary and uncover a new light on the landscape. The master is going to speak or show something; reality is going to open up when you're in the master's company and so your awareness (as has often been said by people writing about contemplative prayer) is a little bit like that of a bird-watcher, the experienced bird-watcher, who is sitting still, poised, alert, not tense or fussy, knowing that this is the kind of place where something extraordinary suddenly bursts into view.

I've always rather liked that image of prayer as bird-watching. You sit very still because something is liable to burst into view, and sometimes of course it means a long day sitting in the rain with nothing very much happening, and I suspect that most of us know that a lot of our experience of prayer is precisely that. But the odd occasions when you do see what T. S. Eliot called 'the kingfisher's wing flashing light to light' make it all worthwhile. And I think that living in expectancy – living in awareness, your eyes sufficiently open and your mind sufficiently both slack and attentive to see that when it happens – has a great deal to do with discipleship, indeed with discipleship as the gospels present it to us. Interesting (isn't it?) that in the gospels the disciples don't just listen, they're expected to look as well. They're people who are picking up clues all the way through.