How the other half live 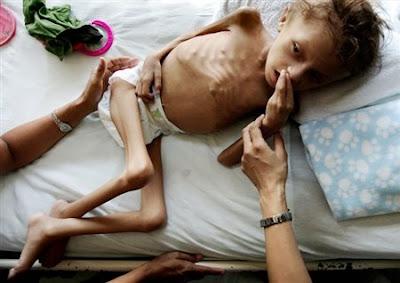 Nine-year-old Jason Lopez rests on a bed at the Catarino Rivas hospital where he is being treated for severe malnutrition after police were tipped off to his condition by neighbors of his family's home in San Pedro Sula, March 8, 2008. Jason, whose eight kg (17.6 lbs.) of weight, which is normal for a two-year-old, is an extreme case in Honduras where nearly 30 percent of all children suffer from malnutrition, according to a report from the United Nations' World Food Programme.
REUTERS/Edgard Garrido