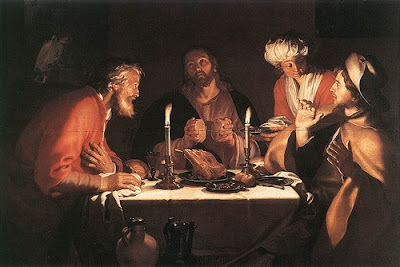 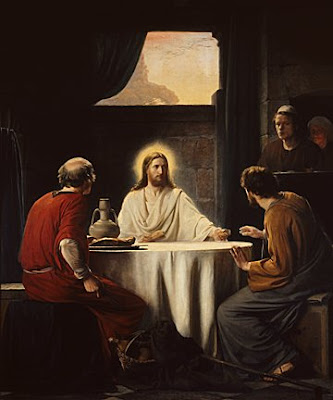 The gospel according to St Luke (24:13-32) tells of the meeting of two disciples with the resurrected Christ. It is only during the meal that his companions recognize him in the way he blesses and breaks the bread. But with that, the vision of Christ vanishes. In the gospel according to St Mark (16:12) he is said to have appeared to them "in an other form" which is why Caravaggio did not paint him with a beard at the age of his crucifixion, but as a youth.

The host seems interested but somewhat confused at the surprise and emotion shown by the disciples. The light falling sharply from the top left to illuminate the scene has all the suddenness of the moment of recognition. It captures the climax of the story, the moment at which seeing becomes recognizing. In other words, the lighting in the painting is not merely illumination, but also an allegory. It models the objects, makes them visible to the eye and is at the same time a spiritual portrayal of the revelation, the vision, that will be gone in an instant.

Caravaggio has offset the transience of this fleeting moment in the tranquillity of his still life on the table. On the surfaces of the glasses, crockery, bread and fruit, poultry and vine leaves, he unfurls all the sensual magic of textural portrayal in a manner hitherto unprecedented in Italian painting.

The realism with which Caravaggio treated even religious subjects - apostles who look like labourers, the plump and slightly feminine figure of Christ - met with the vehement disapproval of the clergy.
Purchasing prints, hiring transparencies and high resolution files Donations for maintaining and developing the Gallery are welcome.
Please send your comments, sign our guestbook and send a postcard.
© Web Gallery of Art, created by Emil Kren and Daniel Marx.

"This drama of the disciples of Emmaus is as a mirror of the situation of many Christians of our time. It seems that the hope of faith has failed.

"Faith itself enters into crisis because of negative experiences that make us feel like we are abandoned by the Lord. But this road to Emmaus on which we travel can become a way of purification and maturation of our believing in God."

The Holy Father continued: "Even today we can enter into conversation with Jesus listening to his word. Even today he breaks the bread for us and gives himself as our bread.

"And in this way the encounter with the risen Christ, which is possible even today, gives us a deeper and more authentic faith, tempered, so to speak, by the fire of the Easter event; a robust faith because it is nourished not by human ideas, but by the word of God and by his presence in the Eucharist."